Biff Pocoroba. Let it roll off your tongue. Biff….Pooooooke…….arobah! Say it with me.

If you were writing a short story for Boys’ Life about a professional baseball team, Biff Pocoroba might have been a name you would have thought up for the character of the crafty, bandy-legged catcher, or maybe the shy, wet-behind-the-ears rookie outfielder just up from the farm. Life imitates art. Seriously, it’s one of the most wonderful baseball names ever. (The only other Biff I’d ever heard of was the chiseled Biff Hooper, the Hardy Boys’ boxing sidekick, who was called on whenever they needed muscle.)

Several years ago, I was in my local yuppie coffee shop, waiting for my soy 180 degree no-foam skinny two-pump four-shot almond caramel peppermint pumpkin spice decaf macchiato, thumbing through a stack of random CDs, when I came across this: 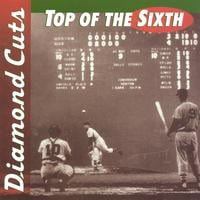 I was completely woolgathering, when some part of my subconscious brain recognized the printed words “Biff Pocoroba.” After a full minute of disbelief, wondering if I had had a stroke, or had been transported to an alternate dimension where Biff Pocoroba was worshipped as a cult deity, I hastily purchased the CD and ran to my car to play the fourth cut on this album.

Fate? I’ll say. Seriously, what are the odds of me, Biff Pocoroba fanboy, finding this CD, which probably had 1500 copies made, tops, in my daily coffee shop, which doesn’t even really sell CDs, in a box no one ever, ever peered in? Because Biff Pocoroba stood in my mind, and still does, as the personification of the truly awful Braves teams whose futility I supported with every breath of my adolescence. For some it might be Rowland Office, for others Rod Gilbreath, or Marty Perez. For me, it will always be Biff. One of my Rotisserie teams was named Sons of Biff Pocoroba. It was going to be Bastard Sons of Biff Pocoroba, but that was too many letters for the space available.

Biff was a so-so contact hitter, but fairly devoid of power. Biff was also a switch-hitter, with a very weird reverse platoon differential (LH OPS 123 points better than righty). He finished with a career .257/.339/.351 slash line, recording 21 HRs and 172 RBIs. He averaged only 186 PA over his nine-year career. His best year was 1977, with 8, count ‘em, 8 taters, 24 doubles, hitting .290 with an OPS of .840. In 1979, he only played in 28 games, and I honestly can’t remember if he was sent down or hurt. There was a catcher named Murphy that the Braves were high on, and when that experiment was over, Bruce Benedict came up and took the No. 1 catching spot. In 1980, Biff pretty much just pinch-hit: he was the third catcher, unable to pry the No. 2 catching gig away from the fabled Bill Nahorodny. In 1981, they moved him to third base to back up the fragile Bob Horner, because while the Biffer’s catching skills were declining, Bobby Cox definitely wanted his .213 SLG in the lineup. Bobby batted him second. In 1982, the year that this series celebrates, he moved back to the No. 2 catcher, giving Eggs days off. (More Biff trivia: his middle name is Benedict.)

His Similarity Scores are guys you never heard of. Honestly. Defensively, he was not terrible, league average or thereabouts. He had a fair number of passed balls, but he also had to catch Knucksie – you try it.

According to JAWS, he was the 573rd best catcher to play the game. (Henry Blanco is 471st. Eddie Perez? 428th.) Yes, he was a stiff. But he was OUR stiff. I recall with complete clarity driving to our church gym one day and hearing him hit a pinch hit grand slam with two outs in the bottom of the ninth (I looked it up: May 17, 1977) to win a game against Montreal. Biff was named NL Player of the Week for the first and last time in his career, and that would be one of the 61 games we won that dreary year.

Biff was named an All-Star reserve in 1978, which simply defies belief, until one realizes the genesis of this honor. Niekro had been named to the team, and none of the other catchers had any interest in embarrassing themselves on national TV trying to corral his butterflies. Biff entered the game as a defensive replacement in the ninth, and Niekro came in two outs later to record the final out of the game, a 7-3 NL win. (NL All-Star wins were like death and taxes in those days, kids.)

Here’s the composer of the song, Jack Stenger, singing his signature piece. Let’s just say there’s a fair amount of poetic license in the lyrics. He was definitely not as good as Johnny Bench.

When this guy plays concerts, they don’t yell “Free Bird!” — they yell “Biff Pocoroba!” We played this so much that my kids can sing most of the lyrics to this song, which is probably good enough to call Social Services.

Oh, Biff. I still love you.

49 thoughts on “Biff Pocoroba (by bledsoe)”