Two men with a common aim. The pitcher in baseball and the bowler in cricket have one goal: get the batter/batsman out. Both can throw hard and use intimidation as a factor, but they have to go about their business in very different ways as per the rules of their chosen game. Again, it’s those differences that make things interesting.

A starting pitcher has longevity as one of his top priorities. He wants his stuff to be effective enough his manager will leave him in well into the late innings. Once he’s removed, that’s it. He will not reappear again in the game in any capacity.

Not so for our bowler, who has to work to a very much less predictable schedule. Let’s say he starts. He delivers six balls/pitches. Then off he trots to the boundary to play defense while his teammate delivers six from the other end. He comes back, resumes and so on. These groups of six balls are called overs. If the batsman fails to hit a run off any of the six, it’s called a maiden, the bowler has bowled a maiden over. Haha, old joke — but that is the correct term.

After he has bowled, say, six overs, his captain might think he needs some rest and so takes him off, and our guy thus is now a full-time fielder on the boundary. At any time during the day’s play, though, he can be recalled to bowl, as can the other three or four bowlers who are part of his team. Some like him throw hard, others rely on guile and are generalized as spin bowlers, a word that has now entered our modern political lexicon. (It means exactly what it sounds like.)

You’ll note the similarities there. And, indeed, hard throwers in both sports can get up to around 90 in velocity, say. But there are two massive differences between the games that govern how they pitch.

First, the pitcher gets there by his gymnastics on a raised mound but predominantly because he’s allowed to bend his arm. Not so our bowler, his delivery mechanism must show a stiff arm when the ball is released. How then does he get to 90? By taking as long a run up as he wants/needs to achieve the necessary momentum before he leaps in the air, brings his stiff arm over and releases the ball. Try it. Thus the need for frequent rests. As long as the arm is stiff there is no rule against dropping it down at delivery, a la Chad Bradford. As he approaches the end of his run up to the wicket he can go either side of it to deliver the ball — that’s called bowling round or over the wicket. 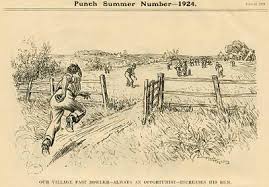 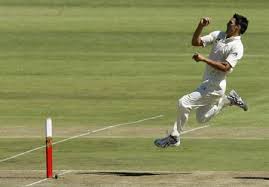 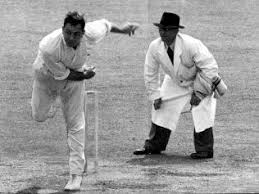 The second difference? The pitcher is aiming to deliver the ball directly into his catcher’s mitt, on the full. He does not, generally, want the ball to touch the ground before it gets to the batter. For our bowler, on the other hand, that would spell disaster — the hitting surface of a cricket bat is four-plus inches wide and flat, so any such delivery arriving on the full is contemptuously dispatched to the boundary.

The bowler thus aims to “land” his delivery into the ground before it reaches the batsman. That could be anything from a half volley (short hop) — though that’s a poor delivery — to several feet in front of the hitter. His skills are such that the ball will come off the ground “breaking” either towards or away from the batsman hoping thus to deceive him into either missing it entirely or catching the edge not the middle of the bat and being caught out. If you are a pace bowler, you have an additional weapon to deceive which is essentially identical to that of a pitcher — movement of the ball, in or out, in the air before it arrives.

Pity the batsman. Having figured out the way a bowled ball may be moving in the air — its “swing” — he must then contend with its possible break after it lands, and how high it is going to bounce. Increasingly in modern cricket the ball is delivered to bounce half way up the pitch and is designed to intimidate by ending up around the batter’s head/ribs…perfectly legal unless the umpires decide it’s being done “too often.” There’s a judgment call for you! Get the roller out. 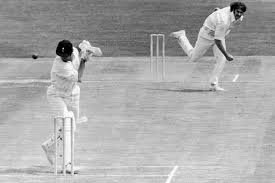 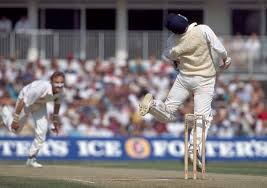 The last major difference is the ball itself, what the bowler has to work with and how much help it gives him when he too engages in his attempts at deception. Specifications. You all know about a baseball. A cricket ball is harder to the touch. That’s interesting, when you consider that all players on the fielding team except the wicket keeper (catcher) must field and catch the ball with their bare hands. Inside it is cork covered by leather, the leather in two halves, the halves stitched together with six rows of stitches all round. It weighs 5 1/2 ounces. Balls made for first class/international cricket can cost a hundred dollars. One likely reason for this is that the ball must last at least 80 overs – that’s 480 “pitches” with the same ball. You cannot change it or lose it, short of an act of God. Hit one out into the crowd and that’s no souvenir — it must be returned immediately, security called if necessary.

(If catastrophe does strike for some reason and the ball can’t be rescued or a Ruthian swing has damaged it to the point it is then unplayable, then both sides and the umpires have to go through the absorbing ritual of examining a basket of old balls and trying to agree on which one most approximates the condition of the one lost!)

During the five hours or so it takes to reach the 480 pitch total, both sides peer at the ball, constantly trying to assess how it is wearing, what’s it likely to do in the air. The bowler on his walk back to deliver the next ‘pitch’ will often be seen polishing it furiously on his flannels trying to get some of the lost shine back – the more shine the more swing for the faster bowlers. As the seams wear it’s that much harder to get the ball to move in the air and off the ground.

After the requisite 80 overs, the captain of the fielding team can call for a “new ball” which is delivered with some ceremony from the Pavilion (dugout). Once he’s got it, it will likely be given right away to his two best fast bowlers who will benefit the most from its fresh shine and full seam. Slow bowlers would generally prefer sticking with an older ball, one that’s been roughed up somewhat. After almost 500 “pitches,” our ball is not what it once was (see below). The bowlers must work with its gradually deteriorating condition. The umpires do not have access to baseball’s five dozen or so to call on at their whim.

And that’s bowling for you…

51 thoughts on “A Gentleman’s Explanation of Cricket: The Pitcher and the Bowler (by blazon)”