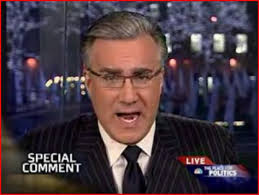 he wondered, posting to the Cloud

that floats on high o’er vales and hills

were bile and venom still allowed


Keith Olbermann is back, for which much thanks. If you are one of the many who’s enjoyment of our game is never wholly complete without smart, provocative, witty commentary coming from outside of Bravesworld your pie is once again complete.  Or tasteless, according to where you’re at.

His genesis, nationally, is well known. In 1992/97 he and Dan Patrick took Sports Center to a level that was the making of ESPN (These Guys have all the Fun, a good read). He got out when he saw the beginnings of Disneyfication emerge, had an unsatisfying few years with Fox, quit – he’s very good at quitting – and then came the transformation to national political guru with MSNBC, ’03 through January ’11..then a bizarre deal with Al Gore which did little for him apart from a huge paycheck(currently in court trying to collect) but helped make Al uber rich with sell out to Al Jazeera.

It’s fascinating he chose then to go back whence he came- everyone had wondered what he would  do.  That parting had been rancorous and well documented. There must have been some interesting to and froing with the awful powers that be in Bristol on the question of editorial freedom but judging by what’s come ‘out’ so far he pretty much won.  For now, at least.  With Olbermann you just have to accept nothing is going to last sine die – it’s always just a matter of time…sooner or later he will say/do something that scares them stiff and he will be gone. We must hope that will be years away not months.

For now then, enjoy. You will not find this level of acerbic erudition  on the sheer fun and nonsense  of  the modern sporting scene elsewhere…opinionated? you bet…the whole point…self deprecating, yes, which helps(one short feature each evening is ESPN  goes back thirty years and shows clips from the old Sports Centers, mustaches and all-very funny..they get to choose apparently, he gets no preview/veto)…baseball at the moment is his obvious priority content on the show- he does an excellent hi-lights review of most games whose irreverence is a huge relief from the norm but the other night there was a marvelous, acid, lengthy piece attacking the NFL concussion settlement…

No one else would/could do that…not with that degree of anger, written and enunciated in that never Socratic way he has.

One last reason to watch – baseball…he is a lifelong addict and a purist with an obvious deep love of the game and its history. Fanatic baseball card collector all his life with an encyclopedic knowledge of that passion. His baseball blog , Baseball Nerd, is still up and even before this new job was liable to go weeks without any postings from him…but it’s still there and if you take a look you will find writing about our game today and what preceded it that is passionate, funny and strident – his style.

but where’s it gone