I started this little excursion to try and figure out why baseball has such a small home field advantage. I had a theory that I could explain it through baseball’s differential travel behavior. That hypothesis failed pretty miserably. But I think I learned a fair bit nonetheless, and I’ll take a few paragraphs to sum it up.

The obvious possibilities are referee bias and its possibly correlated variable, crowd effects. I have always been suspicious of pure crowd effects for the simple reason that professional athletes are exactly those set of people who have inured themselves to such effects. I have always felt that the reason crowd effects are often felt to be so important are: (a) fans know how much they’d be affected by crowds and project that onto the players; and (b) management of teams do nothing to disabuse people of that notion because it helps ticket sales.

Note, by the way, that home field advantages were much higher in the early days of baseball, when crowds were much smaller than they are today. I think there are too many other changes to make much of this but I’m just being honest about where my prejudices lie.

That leaves referee bias — which, I hasten to add, is almost surely subconscious. Many commenters (and a big thanks to all of you — it made this more fun than scary) point to this effect, particularly in soccer and basketball. We should take this as a sign that, Eric Gregg notwithstanding, baseball ought to be proud of the objectivity that the umpires seem to bring to their work. Even incompetent umps like CB Bucknor are just random idiocy generators.

So that’s what I think I learned, but YMMV. I want to thank Alex for agreeing to fill the seasonal interregnum with this experiment and thank all of the commenters here on Braves Journal for such excellent words of encouragement and advice. You guys really helped.

In season I hope to be able to use the Retrosheet database to answer a relevant question here and there, but studies like this are strictly hot stove stuff. Thanks for bearing with me.
Oh, and for mravery, here’s the categorical regression he asked for: 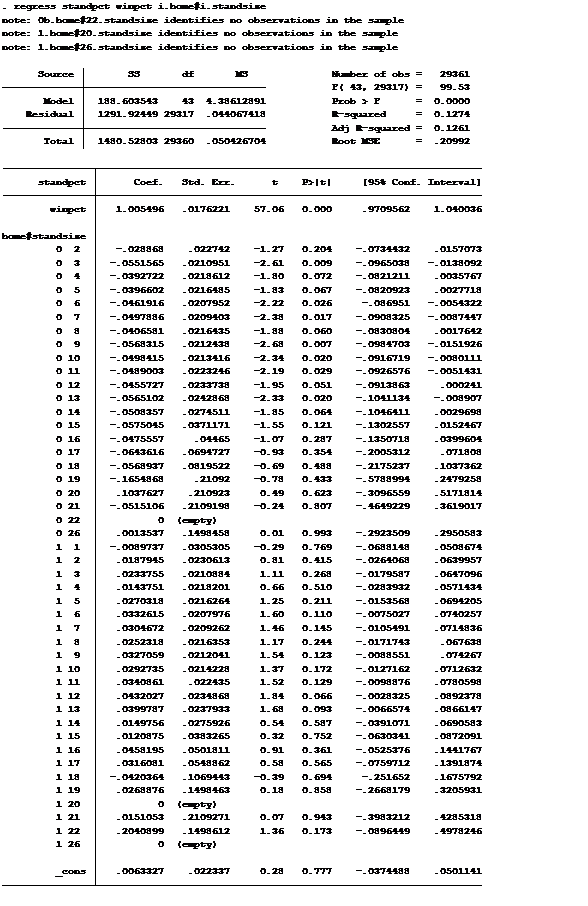 58 thoughts on “How Big Is Home Field Advantage? Part 5: Summing Up (by JonathanF)”